The establishment of the Centre for German-Jewish Studies at the University of Sussex in 1994 has attracted the deposit of various collections that reflect the study of political, social, literary and intellectual German-Jewish history, in particular the history of Jewish refugees and their families to the United Kingdom during and after the Second World War. Please see below for a list of the collections and brief descriptions of their content.

Ilse Eton came to the UK as Ilse Ursell,  with her parents Siegfried and Helene. She later married Bruce Eton, formerly Bruno Einhorn. The collection consists largely of restitution paperwork and correspondence between Ilse Eton and numerous others, including an exchange with Arthur Kramer in the US from 1945 until his death in the 1980s. Gerda Sainer came to the UK as Gerda Federmann in 1933 to undertake a typing course. She ended up staying in London and her mother and aunt joined her during the 1930s. Her uncle Erich went to the US from where they kept in touch regularly through letters. The collection include a significant portion of materials from the family in and around Bromberg throughout the 19th century. Hannah Weinberger came to the UK on a Kindertransport in 1939, leaving her parents and two younger siblings behind. The collection consists of correspondence before and after the war and numerous family photos of the Weinberger family. Ludwig Marx arrived in the UK in 1939 after having been imprisoned in Dachau concentration camp after the November pogroms of 1938 (so-called Kristallnacht). The collection contains many of his literary manuscripts, poetry and articles.

Julius Carlebach was an accomplished Jewish scholar with a distinguished and varied career in sociology, criminology and Jewish studies. His collection contains his personal and professional writings over the course of his career.

Victor and Eva Ehrenberg came to the UK via Prague with their teenage sons Gottfried and Ludwig (later Geoffrey and Lewis Elton) in early 1939. The collection contains rich information on their family history, which includes significant personalities, such as Samuel Meyer Ehrenberg, Franz Rosenzweig and Tilly Edinger.

Arnold Daghani was a Rumanian artist who was imprisoned in a forced labour camp in the Ukraine between 1942-1943. The collection consists largely of artwork, reflecting on his experiences in the camp and throughout his life.

Dr Mac Goldsmith (born as Max Goldschmidt 1902-1983) was an innovative engineer in the field of metal and rubber, primarily in the automotive industry. Building on his successes in Germany, he established himself in the UK from 1937. The collection contains materials relating to his professional, personal and civic life, including a large number of press cuttings.

Andrew Gummers is the son of Julius Gummersheimer, a trained dentist from Germany, who came to the UK via Spain in 1937. He was given the right to practice dentistry outside of London, so he settled in Glasgow, where his son Andrew was born. The collection consists of documents and letters charting Julius Gummersheimer’s life.

Max Sondheimer was running a glue business in Germany with a branch in Tottenham; this enabled him to settle in the UK in 1937. The collection contains a handwritten diary and a small photo album of his experiences in World War I. Also includes his J-stamped passport and further memorabilia from the war.

Helene and Siegfried Ursell came to the UK with their daughter Ilse. This collection consists largely of documentation relating to and required for their emigration and Siegfried’s internment as Enemy Alien in the Isle of Man. The collections is closely related to that of Ilse Eton (SxMs169)

Susan Wallace, originally Susanne von Portheim, and her husband Elmer came to the UK from Austria where her father Leopold had founded the Vivarium in the Botanic Gardens. The collection consists of materials relating mostly to her family history, which is closely related to Elton/Ehrenberg collection (SxMs96).

John Eversley is a relation of the Elton/Ehrenberg family, his father David came to the UK in the 1930s and later joined the British Army. The collection consists of information on the city of Frankfurt and correspondence between David and his wife to be, Edith.

A letter from a prisoner at Auschwitz Concentration Camp to his mother.

Newspaper cuttings of an international campaign to re-name the University in Düsseldorf into Heinrich-Heine University.

Hans Feld was a film critic and writer in Berlin and Prague before his emigration to the UK in the late 1930s. He worked initially as a freelance writer and later as the editor for the Film-Kurier. His collection largely consists of appointment diaries, radio scripts and family documents.

Collection of memoirs in English and German from various refugees and Holocaust survivors. These were given by members of the public to the Centre for German Jewish studies for research and teaching.

Selma Kahn was a German Jewish writer who authored a number of novels relating to the rise of Nazism in rural Germany and the aftermath of the First World War. Her novels are available in several undated drafts. Her literary work is exclusively in German.

Franz Josef Leuwer better known as Frank Lynder, worked for the British Intelligence during the Second World War and after the war made his name as a journalist and a close adjunct of Axel Springer. In addition to the life experiences related to Frank Lynder, the collection provides an inside view of the journalistic work at the German News Services in  post war Germany (Letters to Lisa Hill).

Hermann and Tina Mandel lived in Vienna at the time of the Anschluss, with their son. Tina and the boy were able to emigrate to the UK on a domestic visa, while Hermann was incarcerated. The collection contains correspondence with relatives and friends throughout the war and charts the numerous attempts to get Hermann out of Austria.

The Fein’s were a Jewish merchant family in Leipzig. The collection documents Gerhard and Alice Fein’s life in Germany and from 1933 in London. During the war, they sent their youngest son together with his grandmother to New York, at which point they started to correspond extensively. Both sides of the correspondence form a significant part of the collection. 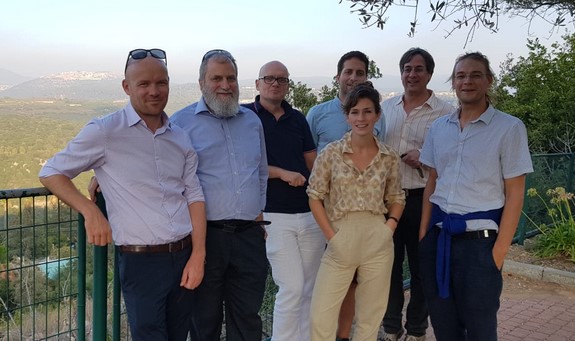