BRIGHTON JEWS IN THE 1851 ANGLO-JEWRY DATABASE The 1851 Anglo-Jewry Database (AJDB) project has been running for almost 20 years. Its aim is to collect data covering the lives of as many as possible of the Jews living in the British Isles in 1851. By this means a substantial demographic portrait is being built up of the mid-19th century population, covering their movements over their lifetimes, their economic and family circumstances, their faith affiliations, and how their lives ended. Some 200 contributors from across the world have contributed data, all subject to the moderation of the database editor. There are currently over 30,100 entries, which means the AJDB covers well over 90 per cent of the estimated Jewish population at the mid-century.

The database is constructed in such a way that it can yield valuable data on individual communities, such as Brighton’s. Because the core criterion for an individual’s inclusion is that they must have been resident somewhere in the British Isles at some point in 1851, it will not yield data on people who died before that year, or were born or came to Britain afterwards. The most comprehensive data therefore relate to that mid-century year. But because everyone who qualifies is tracked (data permitting) from the beginnings to the ends of their lives, the database yields useful information on residence patterns, occupations and so forth from the 18th century through to the 20th.

By way of illustration, the AJDB currently has entries on some 387 Jews who lived in Brighton at some point in their lives, 141 of them in 1851. Two (Myers Levy and Judith Joseph née Myers) were born there as early as the 1770s: they may have been siblings. By the 1820s, in the Regency period, the AJDB records 29 people – still alive somewhere in the British Isles thirty years later – who were living in Brighton in that heyday: the actual Jewish population of the town in the 1820s can perhaps be estimated by extrapolation from these figures.

The AJDB indicates a wide range of occupations among adults living in Brighton in 1851: tobacconist, tailor/outfitter, member of the stock exchange, cigar manufacturer, doctor of philosophy and schoolmaster, fundholder, surgeon dentist, gold- and silversmith, china and general dealer, journeyman cordwainer, butcher, housekeeper, teacher of French language and literature, orange merchant, governess, musician, professor of German language and philosophy, shopman, jeweller, musician, Synagogue secretary, lodging house keeper, hawker, watchmaker, annuitant, confectioner, silversmith, printer, and more. This is fairly typical of the occupational spread found among the Jewish population in mid-19th century Britain, contrasting with the narrow range of occupations likely to have been available in many other parts of Europe at the time.

The Brighton population was 80 per cent British-born, a higher proportion than in many of the growing industrial cities in Britain, which tended to attract more immigrants. Those in Brighton who originated overseas came from Belgium, France, Germany, Holland, modern-day Latvia, Russia and the USA, but the biggest number from what today is Poland. The mid-century Jewish population of the British Isles as a whole was just as varied, indeed much more so: primarily from Poland, but some from all habitable continents. At least 7 per cent of Brighton’s 1851 AJDB population would later emigrate overseas – in their case to India, South Africa and the United States. The wider Jewish population in Britain at the time was strongly attracted also to Canada, South America, Australia and New Zealand, but Brighton’s 7 per cent emigration rate is (on current data) fairly typical.

The average completed family size among those living in Brighton in 1851 was 6.5, also typical of this era when conscious family limitation was just beginning. Most households with children would have five, six or seven in total, but some as many as ten or eleven. Not surprisingly, most families moved house quite frequently as their families expanded and then – on growing up – contracted. It is likely that, in Brighton as elsewhere at the time, the great majority rented rather than owned their homes, facilitating these frequent moves.

Apart from the sometime Brighton residents, the AJDB has entries on a further 124 who lived elsewhere in Sussex at some point. They lived in places like Arundel and Chichester as early as the 1780s, then also Hastings, Lewes, Lingfield, St Leonards and Worthing in the first half of the 19th century, and later on – as these resorts were developed – Bognor Regis, Eastbourne and Hove, along with places like Battle, Crawley and Cuckfield. All these entries relate to people who were living in the British Isles in 1851: they do not include people who arrived in the later immigration surge, nor people who might have lived in these parts in earlier decades but were no longer in Britain (because they had either emigrated or died) in 1851.

This short summary gives some idea of the demographic data that can be gleaned from the AJDB. Bona fide researchers can access files at https://beta.ukdataservice.ac.uk/datacatalogue/studies/study?id=7668&type=Data%20catalogue. For genealogists and others interested in the full records on particular individuals, the database can be searched, free of charge, by individual name at https://www.jewishgen.org/jcr-uk/1851/introduction.htm. The project is ongoing, and the editor always welcomes additional data and corrections: email ajdbc@btinternet.com. 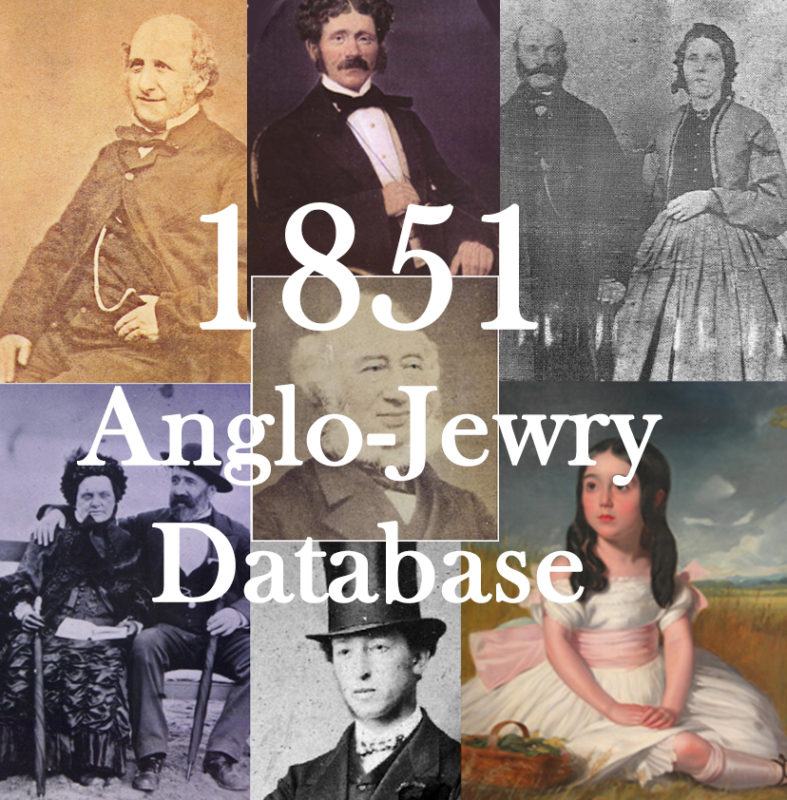