By Yael Brauer, Jewish Chronicle, 9 July 2018 A ceremony has been held in Brighton to honour a local Jewish chief constable who was murdered in the line of duty in 1844. Brighton’s current chief constable, Giles York, joined police and Jewish community representatives for the memorial to Henry Solomon at the old Jewish cemetery… Read more »

A ceremony has been held in Brighton to honour a local Jewish chief constable who was murdered in the line of duty in 1844.

Brighton’s current chief constable, Giles York, joined police and Jewish community representatives for the memorial to Henry Solomon at the old Jewish cemetery in Florence Place, where he is buried.

Godfrey Gould, former chair of the Sussex branch of the Jewish Historical Society, told the gathering that Mr Solomon was bludgeoned to death with a poker by a thief he was interviewing in his office.

Paying tribute to his “revered” predecessor, Chief Constable York said: “Henry Solomon was a generous and compassionate police officer, true to his faith and true to his office. He had 32 men working for him. I have 5,000 men and women working across Sussex — and I do not have a poker in my office.

“But I hope there are elements of the work we do today that are in the same spirit of the work that was done in Henry Solomon’s days.

“Sussex Police are marking their 50th year and it is important we remember our history. It is also important that we listen to our communities and engage with them.”

Fiona Sharpe, one of the ceremony organisers, said it was also important as recognition “of the role the Jewish community has played in civic life in Brighton for more than 200 years.

“To have the current Chief Constable of Sussex recognise the contribution Henry Solomon made to the city and acknowledge the ongoing positive relationship between the police and the Jewish community is a great honour.”

Mr Gould said afterwards that Mr Solomon represented “all that is good in the Jewish community in Brighton and Hove, and in the UK generally. He was an integral part of the local Jewish community, an elder, a trustee and the vice-president. But he was a man who, literally, gave his life to the community in general, with several public appointments culminating in that of Brighton’s first sole chief constable. He is the only Jew ever to have held such a position.” It had not been my intention to include an article on Henry Solomon in this issue of Shofar magazine, primarily because Gordon Franks had already written a comprehensive account of his life and death in the Pesach 5764/2004 issue (no. 65).

However, the historic memorial service at his grave at Florence Place Cemetery to mark the 50th anniversary of Sussex Police, combined with a recent request for a copy of my speech (there isn’t one) has prompted me to add some helpful historical background.

Henry Solomon was born in London (probably the East End) in 1794 and trained to be a watchmaker. In 1821 he came to Brighton, where he married Martha, one of the daughters of Emanuel Hyam Cohen, a schoolmaster who owned two schools and is credited as the founder of the Brighton Jewish community.

One brother-in-law, Levi Emanuel Cohen was the founder, proprietor, manager and editor of the outstanding campaigning newspaper, the Brighton Gazette. A second brother-in-law, Hyam Lewis, was a naturalised immigrant from Prague (and an ancestor of Lord Cohen of Brighton). Hyam Lewis holds the distinction of being the first professing Jew to be elected to public office in England, serving as Brighton’s Town Commissioner.

In tandem with his responsibilities as police commissioner, Henry Solomon also involved himself fully in the affairs of the Jewish community and became first an elder, then a trustee, and, at the time of his death, the vice president of the Brighton Hebrew Congregation.

But it is for his work for the greater Brighton community that he is best remembered. In 1822 Solomom was appointed Inspector of Post Horse Duty at an annual salary of £50. Other appointments followed, some consecutive, some concurrent. Among them: Superintendent of Hackney Coaches, Bathing Machines and Pleasure Boats in 1823, a superintendent responsible for the ‘watering of roads’ in 1826 — a job which he had that same year in conjunction with his role as Inspector of Nuisances, adding the responsibility of Inspector of Gas Lighting in 1827.

At about 8pm that day a young man named John Lawrence was brought in to Solomon’s office in Brighton Town Hall, having been taken into custody upon stealing a carpet from a shop in St James’s Street. Lawrence appeared to be somewhat agitated so the Chief Constable invited him to sit by the fire to calm himself. While Solomon wasn’t looking Lawrence picked up a fire poker and hit the Chief Constable about the head with it. As there were a Constable and three other people in his office at the time, the culprit was immediately apprehended.

Sadly, Solomon was taken to his home but died the next day from his injuries. Two days later, following an inquest, Chief Constable Henry Solomon was buried at Florence Place Cemetery where his gravestone has now been magnificently restored. Later, the Town of Brighton gave Solomon a public funeral and launched a Testimonial Fund to support his widow and many children. A donation of five hundred pounds was given by the town itself, with an additional £50 donated by Queen Victoria, together with and 50 guineas by the Brighton Hebrew Congregation. In all, a total of £1,030-14-0d (£1,030.70p.) was raised.

John Lawrence was tried for murder at Lewes Assizes. Although a plea of insanity was offered in his defence, the presence of four witnesses ensured his conviction. The trial lasted three hours, while the jury took only 12 minutes to reach their verdict without even leaving the jury box. John Lawrence was hanged outside Horsham Gaol on the first Saturday in April 1844.

In his address at the commemoration service on 1 July 2018 Rabbi Hershel Rader quoted from the prophet Jeremiah’s message to the exiled Jews in Babylon some 2,500 years ago: “Seek the peace of the City in which I have exiled you, and pray for it unto the Lord, for in its peace you shall have peace”. (Ch 29,v 7). This was the message upon which Henry Solomon devoted his life, seeking the peace of his beloved city, leaving an enviable legacy to his city and the Jewish community ever since. 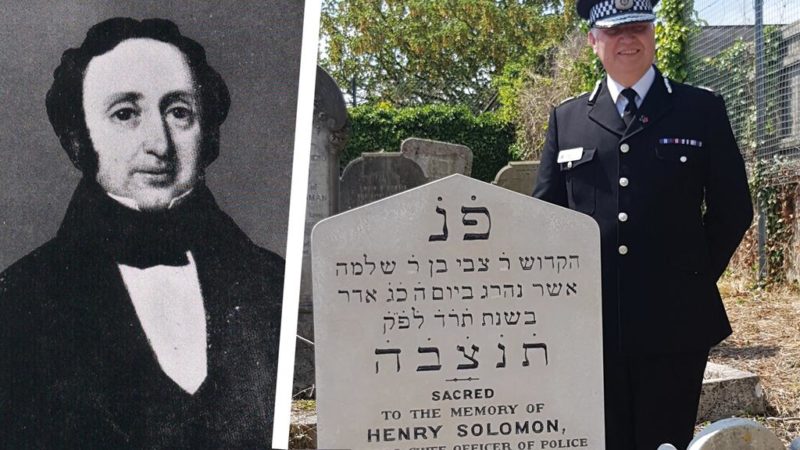