The Sussex Jewish Representative Council, SJRC, (formerly the Brighton & Hove Jewish Representative Council) is one of the oldest cross-communal organisations in the local Jewish community.  Unfortunately, records cannot be found dating back to its inception, but this was definitely well over 60 years ago.  Ruth Sless, the wife of Herzl Sless, Chair and President… Read more »

The objectives of the Representative Council, which is affiliated to, and acts under the guidance of, the Board of Deputies, is to provide an organisation representative of and representing all synagogues and Jewish organisations in the district. The Council’s remit is to take such action as may be deemed necessary to protect and further the interests of, and act as liaison for, the Jews of Brighton, Hove and Sussex. Included in its constitution was to institute and maintain a communal diary.

The members of the Council are representatives from constituent bodies – any synagogue or Jewish organisation in Brighton, Hove and Sussex.  The Council is governed by honorary officers and an executive appointed by its members. The Council was held in high esteem, so much so that Beryl Sharpe (current President) remembers that in the early years, no other organisation would have considered holding a meeting on the same night that the Council convened.

The Council supported the establishment of a Brighton & Hove Jewish Community Centre at Ralli Hall and the Shlichim programme in the 1970s. They were instrumental in introducing the Community Security Levy in the 1980s, and commissioning the Holocaust Memorial sculpture at Meadow View which was unveiled by Jonathan Sacks in 2000.  Hosting Israeli war veterans, representation on the Racial Equality Forum, the Council of Christians and Jews and advising Brighton & Hove City Council on National Holocaust Day have also been facilitated by the Council.

They have organised cross-communal Yom Ha’atzmaut and Jerusalem Day celebrations, and Yom Ha’Shoah remembrance events for many years.  Jewish Continuity, Sussex Jewish Newsand its predecessor Jewish Life,the Radio Sussex Shalom programme, Sussex Day Limmud and the Anne Frank Exhibitions have all been endorsed by the Council.

The Community Renewal Fund and the Sidney Seltzer Memorial Fund fall under the auspices of the SJRC.  In addition, support has been given to disaster appeals by the Council on behalf of the local Jewish community; the most significant in recent times was World Jewish Relief after the Asian Tsunami in 2004.

Today, the SJRC still plays an important role in Sussex Jewish life promoting community cohesion.  With online resources so readily accessible to all, regular meetings have been partially replaced by email communication and the communal diary is available online, on the SJRC website and in Sussex Jewish News.  The Council, led by a Chair Team and small Executive continues to operate as facilitators, co-ordinating and endorsing cross-community issues. 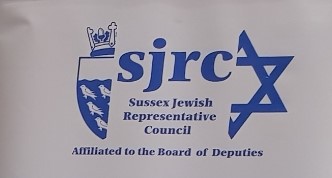