The first issue of Sussex Jewish Newscame out in October 1993 and was the brainchild of Arnold Lewis and Doris Levinson when Irene Noah and her husband announced that they could no longer produce Jewish Lifedue to ill health. The most important features were that it should be cross-communal, non-judgemental and would contain the Communal… Read more »

The first issue of Sussex Jewish Newscame out in October 1993 and was the brainchild of Arnold Lewis and Doris Levinson when Irene Noah and her husband announced that they could no longer produce Jewish Lifedue to ill health. The most important features were that it should be cross-communal, non-judgemental and would contain the Communal Diary (initially collated every month by Pauline Fifer), which needed to be made available for members of the Brighton & Hove Jewish community.

SJN is funded by subscription and was initially hand-typed, photocopied and posted to arrive on subscribers’ doormats on the first day of every month.  Over the years, the magazine has been transformed via modern technology into a full-colour production with vibrant front covers and engaging articles in both paper and online PDF versions.

The SJN team is very small, and is dependent as well as grateful for all those who send in articles, comments, letters and photographs and advise the team of major communal events and newsworthy items of interest.  Each of the four synagogues contributes a page, while additional Sussex communities are also covered. News from the Community Centre at Ralli Hall, information from ‘ex-pats’ from all over the world as well as noteworthy features, theatre, film and book reviews all provide a rich variety of articles for our readers.

Over the years, SJN has benefited from the support of a number of volunteer helpers, in particular Stephen Morris and Katie Lyons who successfully cajoled the magazine into 20th century technology.  Doris Levinson stepped down as editor-in-chief in 2006 due to her late husband’s ill health. Arnold Lewis also sadly passed away in 2007.  Fortunately Linda Freeman took over the editorship of the magazine for an intervening two years, assisted by Ivor Sorokin, David Seidel, Sharon Rubin, and Ivor Miskin until he passed away in 2011.

SJN also had the singular good fortune to be joined by Stephanie and Brian Megitt who had come to live in Eastbourne from Manchester. They are and remain an immense asset, working tirelessly with great expertise, together with Ivor and Gweni Sorokin, Bernard and Lydia Swithern, David Seidel, Michael Rich and Doris Levinson, who has since returned to the editorial board.

Sussex Jewish Newshas been a lifeline for many members of the community and has become a historical resource and living archive for the Jewish community in Brighton, Hove and Sussex. It is sent to the East Sussex archive at The Keep and the Jewish Museum in Jerusalem as well as to readers all over the world. 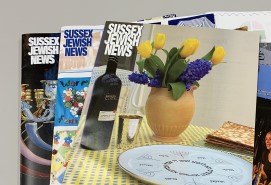